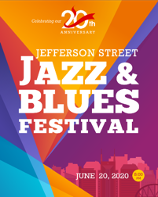 For the first time in its 20-year history, the event was broadcast free online via Facebook Live. The annual festival was converted to a virtual celebration in response to health and safety guidelines related to the spread of COVID-19. The event featured live music performances honoring the impact of diverse music history in Music City and celebrating Black Music Month. Local jazz musician and saxophonist Joe Johnson kicked off the event with a performance. Upbeat R&B band Bizz & Everyday People also performed live.

“Many businesses along the Jefferson Street corridor are still trying to determine next steps and how to recover from the tornado,” said Hurt. “Economic disparities, coupled with COVID-19, has impacted so many, with several businesses trying to decide whether to re-open or not. Mary’s Barbecue and Sliver Sands sustained roof damage, Fifteenth Avenue Baptist Church had extensive damage and of course Music City Cleaners, The Lab, J.U.M.P., and StreetWorks no longer have access to what are now our former offices.”

During the live event, viewers could donate to support J.U.M.P., whose office was condemned after the March 3 tornado, as well as other businesses on Jefferson Street affected by the devastating weather earlier this year. More than $20,000 in donations and sponsorships was raised.