Planning for the 20th Annual Jefferson Street Jazz & Blues Festival (JJBF)  began after the conclusion of the 2019 festival. Jefferson United Merchant Partnership’s (J.U.M.P) Executive Director Sharon W. Hurt shared with duGard Communications (dGC) that she planned for the festival to return to Jefferson Street in its 20th year.  With that thought as a driving force, dGC began its planning with the selection of the 2019 Jeffersonian awardees. Each year, the Jeffersonian winner plays a role in the festival, and with the 20th year on the horizon, we wanted to continue that tradition. 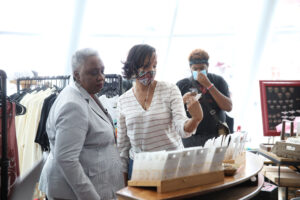 By March 2020, we secured After 7 to headline and were prepared to announce this news and the plan to return to Jefferson St. Those plans were halted as the world began to enter into the first stages of Quarantine. Without a clear vision of whether JJBF would be able to happen as it normally does, J.U.M.P & dGC decided to take advantage of the changing virtual landscape.

J.U.M.P celebrating 20 years of hosting JJBF is a significant feat for a festival that we wanted to  convey through the celebratory tone of this virtual event. The festival was originally scheduled for June 19 – 20 with a return to Jefferson St. on Saturday the 20th. However, dGC recommended utilizing the date, 06/20/20, to celebrate the festival’s history and potentially announce plans for an in-person festival in September 2020.

One of the greatest things about the festival each year is the energy that comes from the performers and the crowds. Grasping that energy and converting it virtually was the essence of what we planned to celebrate the 20th year. We planned energetic conversations that shined a light on the festival’s 20-year history and would fuel the fire as we planned for 2021. 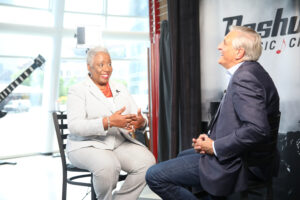 Sponsors, partners, past performers and planning team members joined us to talk about the energy that is created yearly for JJBF and how to maximize the festival’s exposure. The Nashville Scene deemed JJBF the “Essence Festival of Tennessee.” As the interviewer, Sharon took the opportunity to turn this statement into a question for guests to answer that inspires ways to make this festival just as popular.

After researching the best production options for the festival, we landed on Black-owned media company 353 Media to produce the final product. Using a formal production team allowed the organization the chance to brand the virtual event with graphics & video overlays that would give room to highlight sponsors & partners.

The final two-hour broadcast was viewed by more than 7,200 people from across 10 states and raised over $20,000 in support of the North Nashville Tornado Relief Fund and businesses affected by COVID-19. Despite day-of technical difficulties, other key results for the video include 141 peak simultaneous viewership, 463 reactions (love, like or cares), 264 shares and over 200 comments. The initial weekend successes inspired a performance-only encore of the festival. The encore featured Bizz & Everyday People was viewed more than 1,500 times during the weekend it aired. 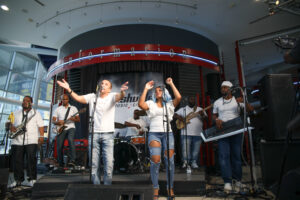 Adjusting to this virtual strategy for the 20th year has inspired dGC to plan ways to keep the momentum from this year going as we (hopefully) head back to Jefferson Street in 2021. Read the blogs on J.U.M.P & JJBF’s website and stay tuned for more information on the upcoming JJBF events.